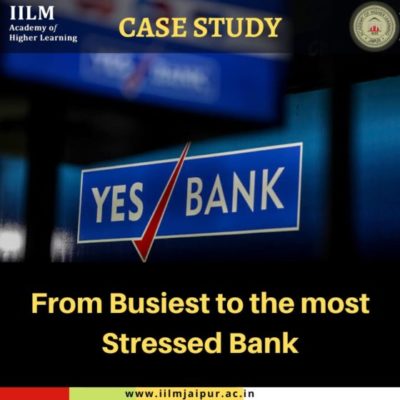 In the recent couple of months, The banking headlines in the economy have been ruled by an explicit decrease in the share prices, credit issues and the absence of speed in recognizing the non- performing assets, commonly the NPA’s.

Inside a given framework, banking disappointments make a scope of negative repercussions from a monetary point of view. Banks facilitate economy’s reserve funds and venture. And in the light of such disappointments- First and foremost, investment suffers.

A similar scenario spurred up when the newspapers were surmounted with the headlines of “moratorium” imposed on YES Bank, the fifth largest lender in the country, by the Central Bank. However, it is to be noted that this is not a sudden popping event; a series of other events are associated with this run-down.

The loaning spree rose as high as 334% between 2014 and 2019, sinking returns, rising defaulters, decreasing share prices, and money laundering altogether worsened the crisis. At least nine companies of the Anil Ambani Group and 16 companies belonging to Subhash Chandra’s Essel Group made up Rs 20,400 crores worth of bad loans of Yes Bank. In 2017 RBI also noticed this situation and started strong monitoring on YES BANK, to which the Bank started to hide its NPAs. RBI found INR 3000 crores difference between actual figures and the figures provided by Yes Bank.

The Bank’s stock price fell steadily in the past year, to a record low of 5.65 rupees. Alongside, serious governance issues and practices in the recent years have led to steady decline of the Bank. The wobbling customers, utterly despaired, because of lined up due payments and installments, started questioning the bankers; queuing in the banks.

Amidst the entire crisis RBI intervened to leg-up YES from its LAST-leg. Now, The RBI came up with a draft reconstruction plan for YES Bank which proposes that depositors’ funds would be protected and wherein, SBI to take a maximum of 49% stake in the restructured capital of the bank.

The entire fiasco highlights a peculiarity of the Indian Banking system, which can be an intrinsic source of problems stretching right into the future.And, these kinds of failures could have easily caused not only economic but also, political nightmares, which would multiply the situation to its worst.

Finding a way to guarantee great wellbeing and validity of the Indian business and Banking framework is urgent to satisfy India’s aspirations as a rising force. The process needs to start right now!