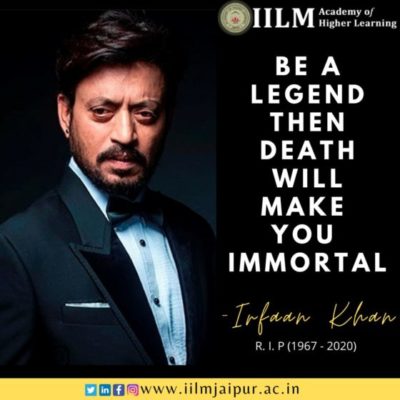 Maybe to become famous is to reassure yourself that whatever you’re lacking inside, you’ve fulfilled that.

Sahabzade Irrfan Ali Khan popularly called as Irrfan Khan is an Indian actor in film, television and theatre. He has unfolded his acting beyond India and today he’s one amongst the celebrated Indian faces internationally. He has won 3 Filmfare Awards, a Screen Actors Guild Award, and an Independent Spirit Award nomination. In 2011, he became a recipient of the Padma Shri, the fourth highest civilian award in India. He has appeared in more than 30 films in Bollywood. He made his film debut with a small role in “Salaam Bombay”. His few remarkable roles of the actor are Paan Singh Tomar, Haasil, Life in a metro, Gunday, Maqbool, Piku, Hindi Medium, Haider and Angrezi Medium.

His few remarkable roles in International projects are The Namesake, New York, I Love You, A Mighty Heart, The Darjeeling Limited, Slumdog Millionaire, The Amazing Spider-Man, Life of Pi, Jurassic World, and in the HBO series. He recently shot for his two upcoming international projects: Dan Brown’s Inferno and another Japanese-American TV series.

His film Piku was one amongst the foremost appreciated films of the year 2015 for which he also received a best actor’s award at the Indian Film Festival. He was also marked as the 1st “Million Dollar Khan” in Bollywood with worldwide success of his Hollywood film Jurassic World. We’d even be seeing him entreating audience in his forthcoming films Jazbaa and Talvar.

He was born and brought up in Jaipur, India. He was born into a Muslim Nawab family. He was studying for his M.A. degree when he earned a scholarship to study at National School of Drama (NSD) in New Delhi in 1984.

He passed away on 29 April 2020 while fighting with Cancer. We lost such a great actor who is globally recognized and always inspired everyone who came close to him.